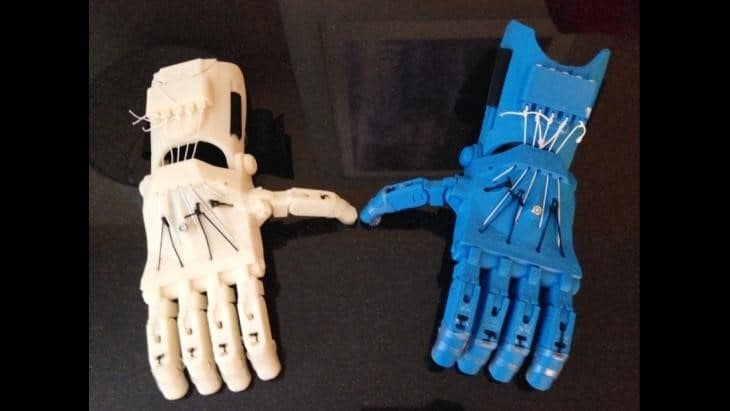 3D printing is a relatively new but promising technology available to professional prosthetists and amateurs alike. Free, editable designs are even available online. So anyone with access to a 3D printer and a DIY mentality can create a bespoke prosthesis at a low price point.

A prosthetic hand can cost thousands of dollars; however, a 3D-printed prosthesis could be made for as little as $50.

3D printing materials cannot yet replace the long-term durability of traditionally-made prostheses. However, this will soon change. In the meantime, technology is making cost-effective prosthetics a reality and encouraging creative people from all over the world to participate in their designs.

The Origin of 3D Printed Prosthetics

The creation of the 3D printed prosthetic movement was truly serendipitous.

Ivan Owen is an artist who designs props and gadgets. He created a mechanical hand for a steampunk convention and posted videos of it online. A carpenter in South Africa who had lost four fingers in an accident saw these videos. He collaborated with Owen on creating a prosthetic hand for himself.

A mother then by chance saw their project and wanted a version of the prosthetic hand for her son Liam. Owen realized that 3D printing would allow the family to create new prostheses on the cheap as Liam grew out of old ones.

Liam’s was the first 3D printed prosthetic hand. Owen decided to put the design files up for free online so others could expand and improve on the designs. This led to e-NABLE, an online community where anyone can help collaborate on 3D printed prosthesis designs and get help printing and assembling their own.

Why 3D Printed Prostheses Are Great For Children

3D printed prostheses are a cost-effective way to keep up with a child as they grow, or damage their current one in the act of being a kid.

Even more importantly, children don’t necessarily want a realistic prosthesis: They want one that suits their personality. In this viral video from 2015, actor Robert Downey Jr. shows up to present a child named Albert with his own Iron Man arm prosthesis:

Personalized prosthetic arms allow children to express themselves. Just like wearing any other accessory. So they can take pride in themselves and their prosthesis.

Current Uses of 3D Printing In The Field of Prosthetics

The e-NABLE community focuses on mechanical prostheses that are simple to print and assemble by anyone, but they stick to Wrist-Actuated and Elbow-Actuated designs. They even provide simple visual guides of different amputations. This makes it easy to pick a design that works with the wearer.

One example is the e-NABLE Phoenix Hand model.

There are also different organizations working on myoelectric prostheses using 3D printed parts, including those that would be suitable for above-elbow amputations.

One of those companies is Limbitless Solutions, the group that created the Iron Man arm featured above and a non-profit dedicated to creating free prosthetics for children. A standard myoelectric arm costs around $10K, however, using 3D printed materials reduces the price by 90 percent to around $1K.

There are also open source communities specific to 3D printed myoelectric arms and hands that are currently prototyping models that can be mass-produced.

There are some 3D printed prosthetic foot designs available online for DIY printing. However, currently, there are not a large number of prosthetic legs because most 3D printing plastics commercially available aren’t strong enough to support body weight.

Organizations with access to more advanced 3D printers and materials are starting to produce leg prostheses that are both artistic and cheaper than traditional prostheses.

When artist Natasha Hope-Simpson lost her leg, a team challenged themselves to create a gorgeous prototype prosthesis within two weeks:

Industrial design student William Root has also recently prototyped his Exo Prosthetic Leg. This is another artistic prosthetic triumph that he was able to print using titanium:

The Future of 3D Printing And Prosthetic Technology

Right now the field of 3D printed prosthetics is young, and many devices are prototypes. What started as a DIY movement for people to be empowered to make their own prosthetic hands is now influencing how professionals make prosthetics.

Look to see more companies prototyping different prosthetics with components that are 3D printed. 3D printing using titanium and other metals or alloys is not common now, however, it will become more so in the future.

The ability to produce cheaper prosthetics is also already ushering in an era of designer prostheses. People with limb loss will be able to afford multiple devices in different styles and swap them in and out to suit their mood.

Need Advice on Prosthetics or Rehabilitation?

If you or a family member has experienced limb loss, you may be looking for advice and support on different types of prostheses or rehabilitation. The Amputee Coalition exists, so you don’t have to go through the experience of losing a limb alone.