The History of Prosthetic Limbs 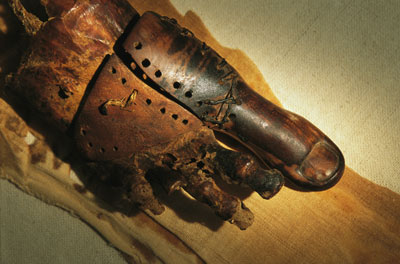 Ancient literature contains references to prosthetic limbs in stories and poems, but some of the earliest historical accounts of prosthetic limb use were recorded in Greek and Roman times. For instance, there’s the historical account of of Marcus Sergius, a Roman general who lost his right hand while battling in the second Punic War. Famously, he had a replacement hand fashioned out of iron for the purpose of holding his shield and was able to return to battle and continue fighting.

In the year 2000, researchers in Cairo, Egypt, unearthed what they believe to be the oldest documented artificial body part — a prosthetic toe made of wood and leather. The device, found attached to the nearly 3,000-year-old mumified remains of an Egyptian noblewoman, is a good representation of how little prosthetic limbs have changed throughout history. With the exception of very recent times, prosthetic devices have been constructed of basic materials, such as wood and metal, and held to the body with leather attachments.

To show how little prosthetic limbs have advanced through most of history, consider the artificial hands and legs of the Dark Ages — nearly 2,000 years later. Armored knights of this era often relied on iron prosthetic limbs, usually crafted by the same metalworker who made their armor. These bulky limbs were admittedly not very functional and were actually used more for the purpose of hiding the lost limb, which was considered at the time to be an embarrassing deformity.

Most famously attributed to seafaring pirates, peglegs with wooden cores and metal hands shaped into hooks have actually been the prosthetic standard throughout much of history. While Hollywood has exaggerated their use of hooks and peglegs, pirates did sometimes rely on these types of prostheses. The required materials for these devices could be scavenged from a common pirate ship; however, a trained doctor would have been rare. Instead, the ship’s cook typically performed amputation surgeries, albeit with poor success rates.

In the early part of the 16th century, French military doctor Ambroise Paré, also famous for his work with amputation techniques, contributed some of the first major advances in prosthetics seen for many years. Paré invented a hinged mechanical hand as well as prosthetic legs that featured advances such as locking knees and specialized attachment harnesses. Around 1690, a Dutch surgeon, Pieter Verduyn, later developed a lower leg prosthesis with specialized hinges and a leather cuff for improved attachment to the body. Amazingly, many of the advances contributed by these two doctors are still common features of modern day prosthetic devices.

With the advent of gaseous anesthesia in the 1840s, doctors could perform longer, more meticulous amputation surgeries, allowing them to operate on the limb stump in such a way as to prepare it for interfacing with a prosthesis. Advances in sterile, germ free surgeries also improved the success rate of amputation procedures, increasing the need for prosthetic limbs.

As artificial limbs became more common, advances in areas such as joint technology and suction-based attachment methods continued to advance the field of prosthetics. Notably, in 1812, a prosthetic arm was developed that could be controlled by the opposite shoulder with connecting straps — somewhat similar to how brakes are controlled on a bike.

The National Academy of Sciences, an American governmental agency, established the Artificial Limb Program in 1945. The program was created in response to the influx of World War II veteran amputees and for the purpose of advancing scientific progress in artificial limb development. Since this time, advances in areas such as materials, computer design methods and surgical techniques have helped prosthetic limbs to become increasingly lifelike and functional.