An Indian scientist, along with his US colleagues, has developed a device called a bionic eye or retinal implant that helps restore the sight of people who go blind due to conditions such as retinitis pigmentosa and age-related macular degeneration. 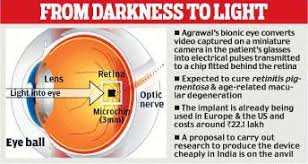 An Indian scientist, along with his US colleagues, has developed a device to restore the sight of people who go blind due to conditions such as retinitis pigmentosa and age-related macular degeneration.

The device, called a bionic eye or retinal implant, has been co-invented by Dr Rajat N. Agrawal, an assistant professor of clinical ophthalmology at the University of Southern California.

He holds the patent for the device along with his colleagues. Retinitis pigmentosa is caused by damage to the retina, the layer of tissue at the back of the inner eye that converts light images to nerve signals and sends them to the brain.

The main sign of the disease is the presence of dark deposits in the retina. The disease impacts central vision, which permits a person to read, drive, and perform activities that require sharp, straight- ahead vision.

Age-related macular degeneration affects older adults, resulting in the loss of central vision due to damage to the macula, a central place in the retina which has the largest concentration of cone cells. The cones are nerve cells sensitive to light, fine detail, and colour.

Agrawal’s bionic eye consists of a chip fitted behind the retina. The system works by converting video images captured from a miniature camera in the patient’s glasses into a series of electrical pulses transmitted wirelessly to the chip, itself an array of electrodes.

These pulses then stimulate the retina’s remaining cells, resulting in a corresponding perception of patterns of light in the brain.

Agrawal wants to bring the device to India by producing a cheaper version with the help of Indian scientists. He has founded a non- governmental group called Retina India to carry out the research.

It has been used by 37 patients in the US and Europe, who were completely blind for 25- 30 years. ” Some have walked across a zebra crossing. Some could read large letters. But they need training in using the device,” Sudamani V., chief operating officer of Retina India, said.

“The implant will be of great help to patients in India,” Dr Amit Khosla, the secretary of the Delhi Opthalmological Society, said.

“It costs around $ 50,000 ( ` 22.1 lakh). Though the price is expected to come down, Agrawal wants an initiative in India to produce a cheaper version which can be tried and tested here,” Sudamani said.

“Aproposal to produce the device in India has been submitted to various departments,” she added.

FROM DARKNESS TO LIGHT